Urban Farming and the Wonders of Cardboard

Once there was an on- and off-ramp to the highway smack in the middle of San Francisco. Then, predictably, there was an earthquake that destroyed some of the on-ramp, and the 4 square blocks surrounding the ramps were gated in and left nearly isolated, save some drug addicts and prostitutes who inhabited it. 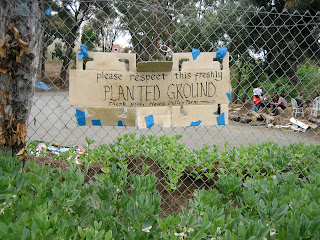 After 20 years and failed plans to develop condos, the space was finally reclaimed as a temporary urban farm called Hayes Valley Farm. Last Friday, I was able to visit it as part of Chronicle Books' Volunteer Day.

Like many urban farmers, the folks at Hayes Valley Farm aim to provide local, sustainable food and educate the community. The latter goal was exemplified by the long tour we got before digging dirt. Jay, our ever-enthusiastic guide, walked us through the process of creating roots for such a project. Highlights included finding a practical solution for saving trees choked in ivy. To salvage the trees, they turned to laying down cardboard at their bases, essentially suffocating the ivy, which would eventually break down with the cardboard, creating a nitrogen-rich soil. 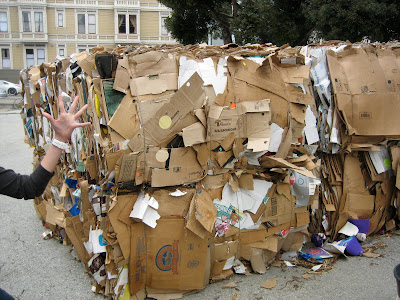 I was amazed at how cardboard was laid down in many places to kick start the farm, and while this certainly didn't make for a pretty sight, they'd figured out a way to re-use an item that would take resources to recycle.

With 2.2 acres, the farmers also used dwarfed trees in pots to conserve space, and had rigged a potato planter out of some chicken wire, soil, and existing potatoes. Apparently, if you create a bed for about 20 potatoes and give it some good sun for 120 days, you'll get 4 times the amount of potatoes. I'm sure there's science behind this, but I'd still like to call it magic. 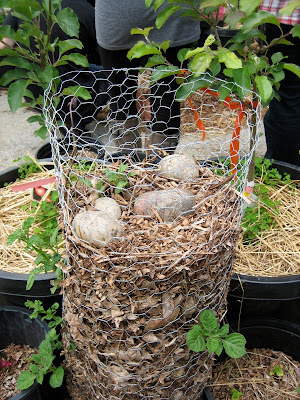 After checking out their compost grounds and walking by some honeybees, we were put to work planting rows upon rows of fava beans. Interestingly enough, we were planting new fava beans because we were also cutting out old ones, tearing them apart, and throwing the remnants back onto the soil. Fava beans emit nitrogen-rich bulbs on the bottom of their roots, so we were creating life only to take it away and create more life. Nice touch, Hayes Valley Farm.
Posted by lisa at 9:55 PM

Email ThisBlogThis!Share to TwitterShare to FacebookShare to Pinterest
Labels: Lisa