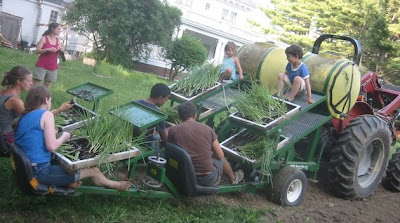 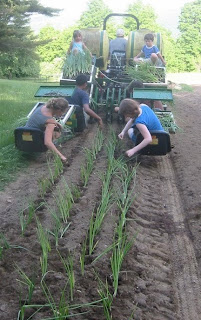 But even having to stop for catch-ups pretty regularly, and some quick covering up after the machine passes, the transplanter still creates the most perfect neat rows, and quickly.
The onions planted in that picture went in the ground and at the end of May and we just pulled them up a few weeks ago. You can't quite taste the straightness of the rows they grew in, but they were still pretty tasty.
Posted by Ben at 1:30 PM

Email ThisBlogThis!Share to TwitterShare to FacebookShare to Pinterest
Labels: From the Farm, transplanter