For the past six and a half of years I've had the privilege of living in a 100 year old house in West Philadelphia. Earlier this summer the owner informed us of his decision to renovate and sell the house, and over the last few weeks, in between times up here at camp, I've made trips home to clear out. The house has been good to me-home to many wonderful people, travelers passing through, and long-term roommates. We've hosted dozens of potlucks, a handfull of workshops, dance parties, and cuddle puddles. 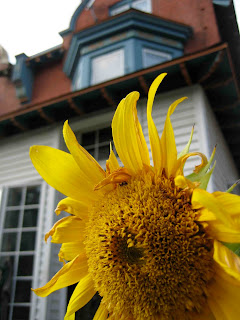 Every year since I've lived there we've kept a garden out front. The space isn't huge, but we've packed a lot in there. At last count, there were over 25 varieties of herbs and vegetables, including tomatoes, corn, basil, sunflowers, rosemary, amaranth, nasturtiums, and crab apples. For the past two summers, I've been away for July and August. I've put in a lot of effort into getting things rolling in the spring, only to disappear in the heat of the summer. My sporadic returns always lead to a surprise revisit to the garden-as I approach the house I wonder what awaits me.

With regular travel, I've taken a fairly hands off approach to this garden-often allowing volunteer tomatoes and sunflowers to take root wherever they happen to appear. Last August when I returned home I was tempted to start weeding and cleaning out some of the beds. After 10 seemingly useless minutes I had the distinct thought that August is a terrible time to try and tame a garden.

Last week I came home to get the last of my things out of the house. I was excited to see what was growing and what had survived the drought we've been in. I was pleased to see the Blue Hopi Corn was doing well, as were some volunteer sunflowers. Most of the tomatoes had died, but one was giving off fruit. The perennial herbs had survived the dry spell and the scaffolding of the contractors, and I clipped them to take cuttings to my new home and farm.

The moving out has been a little hard. I love this house, and had always envisioned moving on with more grace than the current situation is allowing for. So I snapped a few photos of the garden, and felt good about leaving this home with a 12 foot sunflower out front.
Posted by nati at 7:06 PM