Monday was the first ever Farm Festival at camp. We announced it to the campers the previous night, sparking a 10 minute, camp-wide, "Party on the Farm" chant. The day was awesome, and included stations where the campers learned about harvesting and social justice, weeded beds of radishes and squash, made beautiful vegetable signs for the farm, and helped to build more beds in the calendar garden. After all campers rotated through, we held the first ever Farm Olympics Relay, where the entire camp worked together to set a new world record. Events in the relay included "Synchronized Grazing," "Farm Haiku Writing," and the perennial crowd favorite, "Compost Cycle Challenge!"

But the day had started on a more somber note. Monday was Rosh Chodesh, the first day of the month of Av on the Hebrew calendar. We marked Rosh Chodesh Av by placing a giant rock in the Av bed of our Jewish Calendar Garden. 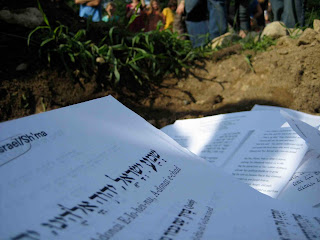 We spoke about the month of Av, and the long history of devastating events during this month, historically as well as in the modern era. We also shared how after the 9th of Av, when we commemorate the burning of the Temple in Jerusalem, the energy of the month shifts, and we embrace the growth that can follow destruction. We used this special moment for the practice of Genizah, burying documents containing the name of God. Each camper placed one of these sacred pages into a giant hole in the Av bed, and then we slowly covered them with soil. As we move through the intense heat of the summer, when we stand in awe of the destruction in the world today, 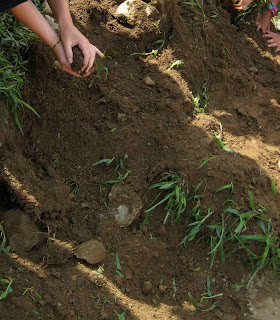 we must always remember that beneath the soil, there lies the potential for renewal.


Oh yeah, and we also had a parade through the farm with one camper wearing a giant carrot costume. 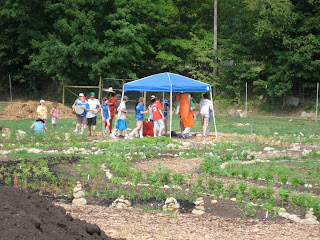